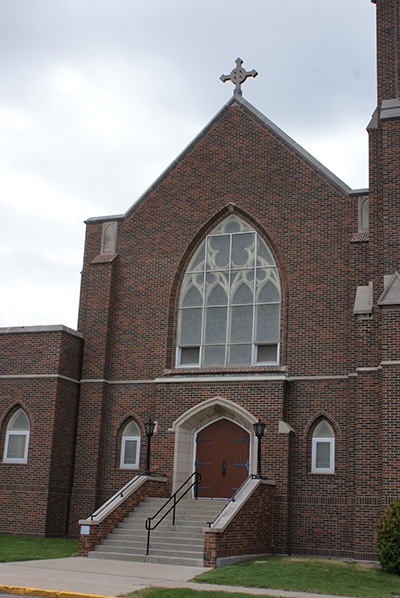 Stained Glass Windows are in need of restoration!  If you would like to be a part of this opportunity to invest in this important aspect of the life of the Church please designate your offering as window restoration. Thank you in advance for your generosity.

First Lutheran Church, founded in 1872, has a rich history. After the 1919 cyclone destroyed the original church, a new Gothic design was chosen. Construction of the Gothic style building began soon after plans were approved.   Raising money for construction was a difficult matter not only because of the overall national depressed economy at the time but also since many church members were engaged in rebuilding of their own property.  Before construction which was conducted throughout 1920, worship services were held in the basement of the destroyed church. “We put tar paper on top of the sub floor and had church downstairs for a long time,” said Reuben Peterson, also recalling that the basement walls were blue. When the lower level of the new church was finished, worship services were held there. A wood furnace heated the entire open space, which was about twenty feet long, Reuben said. ” It was tied into the present radiators underneath the ceiling.” Digging of the new basement was with horses and a device called the fresno. The church ended up being about two feet higher than was planned since the groundwater prevented deeper digging. “They couldn’t handle the water. They couldn’t go any deeper” Reuben said. Congregation members volunteered many  hours to work on the building. The fact that the new church was built in the shape of a cross was a decision made by the congregation. The very shape of the church symbolizes the foundation on which it rests.

FIRST LUTHERAN’S WINDOWS: Continuing the Tradition of Art in Worship

At First Lutheran Church, we are fortunate to have three distinct sets of stained-glass windows – created at different times, by different artists – to help us understand the faith in which we worship. Our oldest windows, in the sanctuary, depict Christian teachings, the Trinity, the apostles and Gospel writers. Windows in the small chapel represent the means of grace, the Word and Sacrament, and the faith of children. Our newest stained-glass “parables,” located in the narthex, greet all who enter with vivid reflections of creation, discipleship and other Christian themes.

Our sanctuary windows date back to the rebuilding of First Lutheran Church following the 1919 cyclone. After considerable discussion, it was decided that stained-glass windows should be included immediately, with the installer offering to remove the windows later if they could not be afforded. Today, these sanctuary windows, which cost $3,350 in 1920, are regarded as “priceless art treasures,” almost impossible to replace with equal craftsmanship.

When the parish house wing and children’s chapel were added to First Lutheran Church in 1954, the chapel’s stained-glass windows were given to the church as a memorial. The windows were fabricated by the Conrad Pickel Studios of Waukesha, Wisconsin. 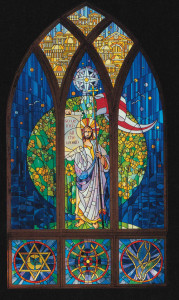 First Lutheran’s narthex windows were all designed by David J. Hetland of Fargo, North Dakota; the gothic arch, rose and transom windows were fabricated by The Lightbenders Glass Studio of Fargo and installed in 1990. Fabricated by Michael Orchard Studio of Fargo, the seven Creation windows were installed in 1996-97. Most of the glass for these windows was handpicked by the artist at the Kokomo Opalescent Glass Company in Kokomo, Indiana – a century-old company that, at one time, supplied about eighty percent of the glass for the works of Louis C. Tiffany.

Along the ramp leading from the narthex to the sanctuary, four sets of small transom-style windows offer our supplications to God. Themes of faith, hope, love, prayer and forgiveness woven into the design are taken from scripture. Visually, the windows contain traditional Christian symbols, expressed in a contemporary style.

Each depicting one day of Creation, the series of seven windows begins on the north side of the narthex, then continues from east to west in the south windows. Stained glass occupies only the clerestory windows on the north side, providing an unobstructed view of the beautiful courtyard. Above the entrance is, fittingly, the depiction of the seventh day, with its invitation to rest and worship.

Population of Creation takes place on the fourth, fifth and sixth days, depicted on the south side of the narthex. Cathedral and clear antique glass enable a veiled view outward. Unifying all of these windows is a ribbon of light, beginning in the first window, where it is separated by God’s hand from the shadows around it. On the second day, the ribbon becomes the line separating sea and sky, and on the third day this ribbon of light, water and sky forms a vine which bears lush fruit. This element continues in the south-side Creation windows. In day four, the ribbon of light is depicted as a rainbow, a sign of God’s promise. On the fifth day, it flows in a smooth current, forming the waters that are the lifeblood of the sea creatures. In the entrance window, the ribbon shape defines the profile of God the Creator looking down from the heavenly city at the people he created on the sixth day – where the ribbon represents a human lifeline.

Unlike the oldest stained-glass windows of Europe, today’s stained glass is protected from the elements. Its lifespan will be long; in perhaps one hundred years, future church members will need to relead First Lutheran’s windows, which otherwise require little maintenance. Despite their creation in a seemingly fragile medium, stained-glass windows are a permanent art form. First Lutheran’s windows reflects different artists, styles, materials and times. Yet whatever their artistic styles, the shared symbolism of their Christian message – the power of their “visual parables” – will endure. First Lutheran’s carefully wrought stained-glass windows are based on God’s Word – a story that will not be lost, but transcends generations to offer its symbols and lessons of faith to passersby and to all believers who worship here.